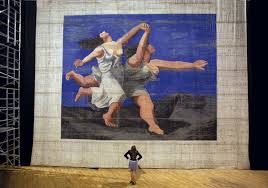 Anyone even marginally interested in ballet, art, or fashion should head to Washington D.C. this summer for the knock-out blockbuster exhibit “Diaghilev and the Ballets Russes, 1909-1929: When Art Danced with Music” at the National Gallery of Art. Adapted from a stellar 2010 exhibition at London’s Victoria & Albert Museum (curated by Jane Pritchard), the wildly colorful, entertaining, and often astonishing show celebrates one of the most innovative dance companies of all times. As the National Gallery explains, the Ballets Russes “propelled the performing arts to new heights through groundbreaking collaborations between artists, composers, choreographers, dancers, and fashion designers,” an unheard of phenomenon in the early 20th century.

It was visionary Russian impresario Sergei Diaghilev who brought together a Who’s Who of creative geniuses – Nijinsky, Pavlova, Picasso, Matisse, Man Ray, Bakst, Fokine, Stravinsky, Cocteau, Chanel, and countless others – creating nothing less than an aesthetic firestorm that electrified the world. The youngest-ever member and soloist of this illustrious company was 14-year-old Lilian Alicia Marks. Though known to dislike children, Diaghilev developed a close bond with the frail British dance prodigy after first seeing her perform as a 10-year-old. 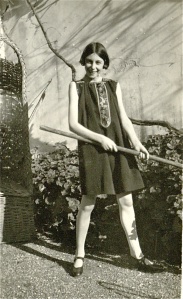 A very youthful 14-year-old Markova at the Ballets Russes

Surprising everyone, Diaghilev became a father figure to the earnest, painfully shy girl, whisking her away from foggy London to sun-drenched Monte Carlo, home of the famed Ballets Russes. There Diaghilev renamed his “little daughter” (as he fondly called her) Alicia Markova, and began her fairy-tale education. “Uncle Igor” Strainvinsky was Markova’s music instructor, Matisse and Picasso taught her about modern art, and she learned about fashion from none other than Coco Chanel.

“To my dear little thing,” Balanchine wrote to Markova

Also joining the company in 1924 was the untested, up-and-coming choreographer George Balanchine. Because of Markova’s astounding technique – able to do many jumps and spins formerly only performed by men – Balanchine selected the practically mute teenager to star in his first ballet for Diaghilev: Le Chant du Rossignol (The Song of The Nightingale). It would be a huge success for them both, with Balanchine on his way to becoming the most influential choreographer of the 20th century, and Markova a future world famous prima ballerina. The Nightingale introduced Balanchine’s never-before-seen modern balletic stylings and Markova’s ability to effortlessly float and fly like a bird.

The photo above shows Markova in a Matisse-designed costume for the ballet, but it wasn’t the original one she wore for the 1925 premiere. While Alicia had been picturing a brown-feathered tutu for the role of a tiny bird, Matisse had other ideas, as the ballerina reminisces in The Making of Markova: “Listen little one,” Matisse was saying, “white silk tights all over, then white satin ballet shoes, large diamond [rhinestone] bracelets around both ankles, the wrist of one arm, and the other just here above the elbow, a little white bonnet like a baby’s and no hair to show. Please dear remember, no hair.”

For the first time in ballet history, a ballerina appeared on stage wearing nothing but a second-skin leotard, and in white georgette, the teenaged Markova looked practically nude! She was so tiny and under-developed for her age, however, that the 14-year-old looked anything but vulgar, completely charming the French audiences. England was another story, however. When the Lord Chamberlain got wind of the “risqué” costume, he banned London’s own little Alicia from wearing it on stage. Matisse saved the day by designing a white chiffon tunic and pants (as seen in the photo above) so the show could go on. 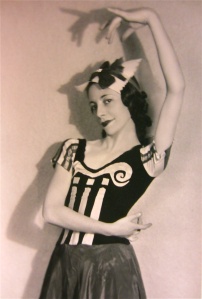 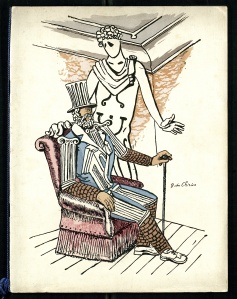 1929 Ballets Russes program with cover by Giorgio de Chirico illustrating his costume designs for Le Bal (1929), such as the one worn by Markova seen here

Markova saved all the glorious Ballets Russes programs from her magical time with the company. Cover illustrations, costume designs, and photographs were created by the likes of Picasso, Derain, de Chirico, Braque, Miro, and Man Ray among others. They are part of the vast Alicia Markova Collection at the Howard Gotlieb Archival Research Center at Boston University and will be on view with other personal memorabilia belonging to the legendary ballerina from July through November 2013. The Making of Markova exhibit is free and open to the public in the Gotlieb Memorial Gallery on the first floor of the Mugar Memorial Library at Boston University.

The five years Markova spent at the Ballets Russes were the most influential of her career. In addition to being trained by the unquestioned creative superstars of her day, she met many dancers, choreographers, composers, and artists who became lifelong friends and colleagues. Seven years older than Markova, Alexandra Danilova was both Balanchine’s lover and a protective big sister to the timid dancer when they met. Two of the greatest ballerinas of their generation, the pair would be one another’s confidante, playmate, teacher and supporter for seven decades. Markova was eternally grateful to the man who that made all of that possible – the incomparable Sergei Diaghilev