Markova considered the right tulle as important as toe shoes

In the close to 10 years I’ve been writing about fashion trends for The Boston Globe, I don’t think a year has gone by without a runway show influenced by the ballet. Those dreamy gossamer fabrics and figure-enhancing silhouettes are catnip to both designers and the their amply-funded clientele.

While researching The Making of Markova, I learned a great deal about the fascinating intricacies of ballet costumes. To enraptured audiences, the legendary ballerina seemed to float effortlessly in the air – her tutu as featherweight as the dancer herself. That combination of otherworldliness, fragility, and seductive transparency – now you see flesh, now you don’t! – has inspired countless fashion interpretations over the years, from breathlessly romantic to rather scandalously modern.

Markova as the Sugar Plum Fairy in The Nutcracker Suite, 1950 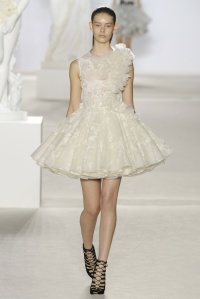 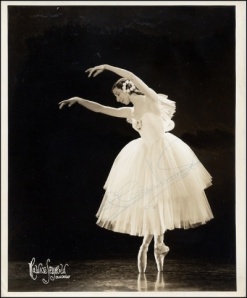 Markova as the otherworldly spirit of Giselle (1939)

But as costly and elaborate as those designer gowns may be, they pale in comparison to the complexity of classical ballet costumes. First is the issue of fabric choice. A form-fitting corset of lustrous satin might look magnificent but can also cause a ballerina to slip from her partners hands during a lift. Markova sometimes had two different tops made for the same skirt (at her own expense, I might add): shiny satin for important press photos, and a matte version to perform in. Textured silk taffeta can present a different problem, especially in a layered full skirt. Markova laughingly remembered a corps of taffeta-clad ballerinas rustling so loudly that they could no longer hear their music cues! And then there’s ornamentation. Every sequin, silk flower, and bead needs to be hand-sewn and carefully fastened tight. If one were to fall on the stage during a performance, a dancer could easily slip and injure her foot.

This ballet skirt required 34 yards of fabric! Markova with Anton Dolin in Giselle.

But most complicated of all is proper tutu construction, truly an architectural marvel. There are 34 yards of net in each traditional ballet skirt like the one at left, and 18 yards in a short tutu. For each skirt, Madame Manya, Markova’s longtime costume designer (and Anna Pavlova’s before her), created nine different layers of tarlatan (a kind of muslin) topped with several more of diaphanous tulle. In between, a crinoline hoop was carefully hidden between the folds to give the skirt body without stiffness. Before the days of beautiful man-made materials, the fabric costs for ballet costumes could be exorbitant and beyond the budget of fledgling companies. That was the case when Markova pioneered British ballet in the early 1930s, dancing at one of the first London-based companies, the Ballet Club.

Its founder was ex-Ballets Russes dancer/teacher Marie Rambert, who formed a combined school and performing troupe. One of Rambert’s money-saving tricks was to buy the cheapest tarlatan material she could find for the tutu underskirts, and then add just a single top layer of fine tulle. That might have fooled the audience, but the under layers itched the dancers like crazy!

Markova lamented that cheap fabrics cheated the audience, as they took away from the magical, dreamlike quality of ballet. Whenever she could afford it, she used her own money to buy quality fabrics so her costumes would look more luxurious and ethereal. In the early days, she hand-sewed the elaborate skirts herself (a talent she quickly mastered), later turning to experts like Manya when her salary improved. After Markova became famous – and well-paid – she insisted upon buying beautifully-made costumes for other dancers as well, as she once did for an entire ballet company in financial trouble.

While Markova’s main concern with costuming was to create a transportive illusion for the audience, many male soloists were driven more by personal vanity. The inventive dancer/choreographer Léonide Massine was bowlegged, not ideal for a male ballet star. Given that Massine’s strength was not in classical roles, but rather in showy character-driven parts (which he often created for himself), he was able to avoid second-skin tights, opting instead for camouflaging knickers and pants.

On the other hand (or foot), there was absolutely nothing wrong with the legs of Rudolf Nureyev, considered one of the greatest male ballet dancers of the 20th century. Many of the celebrated star’s costumes were recently on view at the de Young Museum in San Francisco.

“He made it [ballet] sexier and more electrifying,” wrote Sarah Kaufman of the Washington Post in her review of the de Young Museum exhibit Rudolf Nureyev: A Life in Dance. “Nureyev’s costumes could have been a fantasy king’s couture, made to measure for an extraordinary slim waist and broad shoulders in silk, velvet and lace. As Cary Grant was with his suits and shirts – sending them back for fractional faults – so was the sharp-eyed ballet star with his stage attire.” 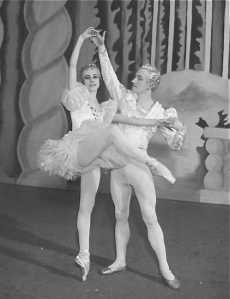 Markova and partner Stanley Judson in The Nutcracker, 1934

Interestingly, the elaborate ballet costumes of male soloists (see Markova’s partner Stanley Judson above left) also inspired Paris couture fashions this fall. The outfit, however, was for a woman.