From a shy dance prodigy at Diaghilev’s famed Ballets Russes, Markova would become the most independent prima ballerina of her generation.

Brand new year – brand new you, tout January advice columns. But while “you are your own brand” is a decades-old business mantra, it’s a relatively new phenomenon in the high-culture world of ballet.

Call them footloose and fancy-free agents – a new generation of ballet talents who maintain “jeté setting careers,” according to a New York Times article by Roslyn Sulcas and Michael Cooper. “A wave of international ballet stars are increasingly leaping from company to company, creating their own brands and becoming more like world-traveling conductors and opera stars. In doing so, they are upending ballet’s traditional professional path and changing an art form long defined by national styles that dancers perfected as they grew up with — and stayed loyal to — a single company.”

But “upending ballet’s traditional professional path” is not a new phenomenon. Over 70 years ago, Alicia Markova startled peers by becoming the first, and only freelance prima ballerina of her generation. As the London News Chronicle reported in 1955, Markova “is to dance what Menuhin is to music, but unlike the violinist, she has no competitors in her field, for all the other leading ballerinas, from Fonteyn to Ulanova, work in the framework of established companies. Indeed, it seems as though Markova may be the last of her kind – the ‘rebel’ dancer who is prepared to carry the full responsibility for her career on her own delicate shoulders.” 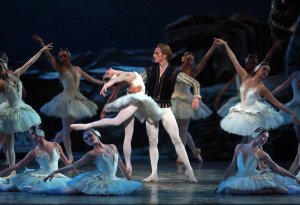 Not only was Markova’s declaration of independence far ahead of her time, but her motivations were equally remarkable, and quite different from today’s “rebels.” As celebrated dancer Alina Cojocaru told the Times, “Ballet careers are relatively short and require years of training that pose the risk of injury, yet the world’s top dancers earn far less money than their counterparts elsewhere in show business. Belonging to two companies or making numerous guest appearances increases earning power.” 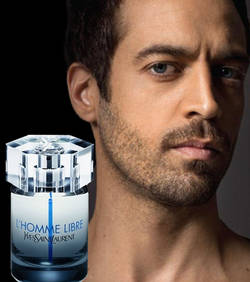 Paris Opera Ballet Director Benjamin Millepied (and husband of Black Swan star Natalie Portman) sniffs the air at YSL, and has made a television commercial for Air France.

Also increasing dancers’ earning power – not to mention name recognition – are advertising endorsements. More from the Times: “top-level dancers, thanks to social media and advertising contracts, are increasingly able to capitalize on their own brands. Ms. [Polina] Semionova recently appeared on billboards alongside the tennis star Novak Djokovic in a Uniqlo advertisement; Mr. [Benjamin] Millepied has appeared in advertisements for Dior and Saint Laurent; Yuan Yuan Tan, a principal dancer at San Francisco Ballet, is a brand ambassador for Van Cleef & Arpels and Rolex. ‘Why can’t a ballerina be as public as a tennis figure?’ asked Sara Mearns, a principal dancer with New York City Ballet.” 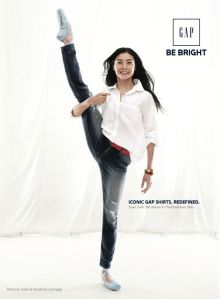 Why indeed? Appearing in a mainstream Gap ad introduced San Francisco Ballet dancer Yuan Yuan Tan to a whole new audience, potentially leading to higher ticket sales for her performances. But such tie-ins are not modern concepts. A century ago, the legendary Anna Pavlova happily endorsed Ponds Vanishing Cream for a tidy sum: “I find it is very good for softening and whitening my skin,” she claimed.

But Markova topped them all as an international brand magnet for a wide variety of products. Hers was a household name around the globe, and advertisers continually came calling to borrow a cup of the ballerina’s fame. 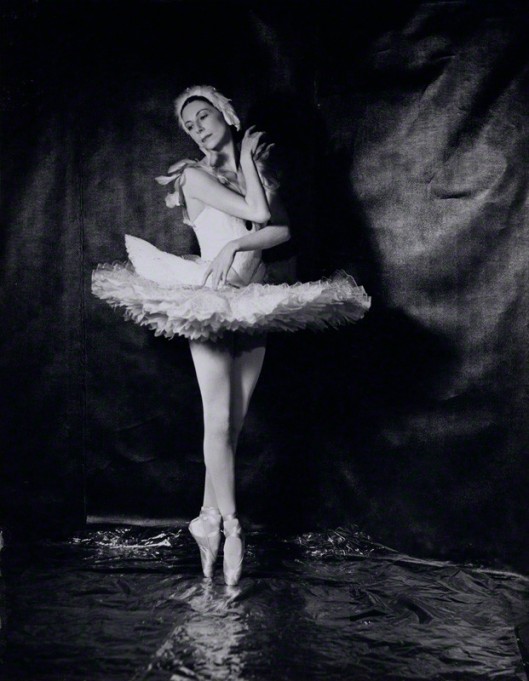 Markova’s signature “Dying Swan” made audiences all over the world swoon. (1950, © Gordon Anthony)

As New York Herald Tribune columnist Art Buchwald wrote in 1953, “Miss Markova, considered by many as the greatest living ballerina, and by others as the greatest ballerina who ever lived, flew to Paris to appear in six ballets . . . Because of her fame, experience, and talent, she is one of the few ballerinas in the world who can free-lance, go where she wishes, do what she wants and demand the salary she believes she justly deserves.”

Markova on tour in South Africa

Though she became the highest paid ballet dancer of her time, a pile of money was not Markova’s objective. “We come from a family of inventors and pioneers and this spirit seems embodied in Markova,” wrote the ballerina’s sister and frequent business manager Doris Barry. “As often when she could accept a lucrative engagement in London or New York, an offer comes from a new national company struggling to establish itself, and though she knows it means physical discomfort from climate, hotels, etc., we find ourselves in a plane and my sister turns to me and says, ‘Well, here we go again – another new country to conquer.'”

Markova’s image enhanced sales of a 1958 Paris orchestra concert album of Les Sylphides, one of her more famous roles.

Markova was an egalitarian. She thought ballet should be for everyone everywhere, no matter where they lived or how much money they made. She used her sizable earnings not to buy a country home or luxury residence – she lived with her sisters in a rent-controlled flat in London! – but rather to subsidize her far-flung travels and charity work. When the Royal Winnipeg Ballet asked Markova for help raising funds for their deeply in debt company in 1954, she didn’t hesitate. RWB member Betty Farrally fondly recalled that Markova “took time to teach and coach the dancers, and when the costumes for Les Sylphides failed to meet with her approval, she dug into her own pocket and paid for new top layers.”

Though Markova was called the “spirit of the air” by dance critics, it was her down-to-earth interviews that endeared her to the public. So while she was often photographed wearing couture fashions and jewels for style magazines, it was mainstream, rather than luxury, advertisers that sought her endorsement. (Markova’s romance with the dashing Van Cleef & Arpels scion Louis Arpels being a different sort of endorsement entirely.) As early as the 1930s, Markova was approached by a popular chocolatier: “Cadbury chocolates keep you on your toes!” says famous ballerina.

Even more amusing was Markova’s serving as an unpaid spokesperson for England’s “Potato Council.” That’s right – potatoes! It seems the ailing British agricultural industry was desperately in need of a boost when Markova revealed to a London newspaper that she ate a steak and potatoes after every performance to get her energy back. A lightbulb went off in “spudville,” and a new impresario was born: Potato Pete, a jovial cartoon drawing that “presented” an elegantly dressed Markova in a promotional brochure offering up her favorite potato recipes.

Markova’s exceptionally beautiful hands and feet starred in two different ads, one glamorous, one not so much.“Whose hands are these?” inquired La Cross fine nail polish. Markova “was talented to her fingertips,” came the playful answer.

A similar question was posed by Morlands footwear, with the headline “Whose famous feet are these?” But Morlands didn’t design fragile glass slippers – just practical sheepskin-lined boots. The copy began, “In my walk or should I say dance of life,” says Alicia Markova, “a cold can spread calamity,” going on to extoll Markova’s sensible approach to winter footwear. A writer for World’s Press News wrote of the ad: “Testimonial advertising has never been my cup of tea. But this ad does it so cleverly, that I think my next slippers will be from Morlands.”

But perhaps the best use of Markova’s name and passion was in an ad for Basildon Bond stationery. “I chose the ‘Bunch of Amateurs,'” says Alicia Markova, read the headline. The body copy continued: “In the autumn of 1931, my life was at a crossroads,” says Alicia Markova. “I could either go to join Massine in his world-famous Ballet Russe De Monte Carlo, or I could join Ninette de Valois as Prima Ballerina at Sadler’s Wells in the embryo Vic-Wells Ballet. Superficially Massine’s was the more attractive offer, but I wanted to prove that ballet could succeed in Britain, so, after much thought, I wrote to accept Ninette de Valois. Some of my friends laughed at me for joining, as they put it, ‘a bunch of amateurs in the suburbs.’ But the laugh was on them. That ‘bunch’ put British ballet on the map and became eventually the brilliantly successful Royal Ballet, renowned throughout the world.” You never know which of your letters may turn out to be important, Basildon Bond concluded.

Markova in the “50 of the Greatest Britons” commemorative card set

The range of brands asking to be associated with Markova was mind-boggling – everyone from Reader’s Digest and El Al Airlines to Farnsworth Television and Craven ‘A’ cigarettes (though the health-conscious ballerina never smoked). Before the internet and social media, it’s hard to imagine the worldwide recognition of Markova’s name. Her image was featured on postcards, in crossword puzzles, and as one of Brooke Bond Tea’s collectible “50 of the Greatest Britons” picture cards (alongside the likes of Winston Churchill, Charles Dickens, Lewis Carroll, Florence Nightingale, and George Bernard Shaw). 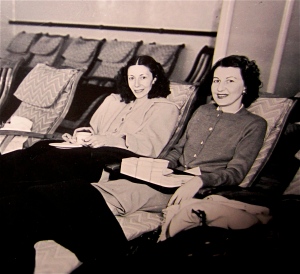 Markova and sister Doris crossing the Atlantic by ship

A frequent trans-Atlantic ship traveler, Markova soon found her photo on the Royal Mail Lines menu. She was clearly an appetizing entree.

And Markova’s fame was hard-earned. Unlike all her movie star friends – from dancers Gene Kelly and Leslie Caron, to fellow Brits Charlie Chaplin, Laurence Olivier and Vivien Leigh – Markova didn’t appear in films that reached millions of viewers internationally. The prima ballerina personally traveled the globe performing to sold-out crowds in a startling number of countries, an impossible feat had she not chosen to self-manage her career.

“It is usually believed that guest ballerinas invited to appear with major companies have an easy time in comparison with the day after day performances of the regular stars of those companies,” reported Dance News in 1955. “But just take a look at Alicia Markova’s schedule for the next two months and see what she has lined up for herself.” The list included a BBC production of Giselle in London with the 18-years-younger Danish star Erik Bruhn, partnering with Bruhn again in Copenhagen for the Royal Danish Ballet, performances at Stockholm’s Royal Opera House, a gala opening of the Grand Ballet du Marquis de Cuevas in Paris, and the opera season in Chicago. For that same time period, she had to turn down offers from Helsinki, Amsterdam and Brussels, but made sure to attend the annual children’s hospitals charity ball in Deauville, performing with friends Gene Kelly and Maurice Chevalier.

The Markova comic book: a ballerina superhero for the next generation of bunheads

Markova was a much loved and revered brand if ever there was one, but her most cherished fans were too young to understand the concept. They were all the ballet students who took lessons with a photo of the great Markova up on the wall for inspiration. Perhaps a few of those bunheads owned the comic book at left, illustrating Markova’s trials and tribulations on the way to becoming a ballet superstar.

Even without a cape, Alicia Markova could leap tall buildings with a single bound!